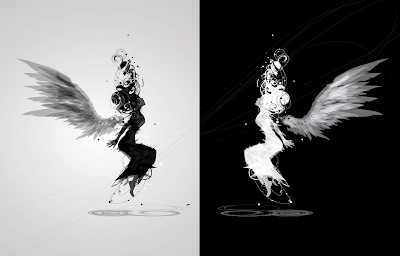 Posted by Justin at 8:08 AM No comments: 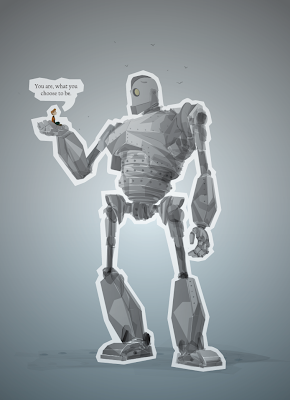 This movie is one of my all-time favorites. the thing is a masterpiece. I really couldn't recommend it more.

other news:
Did a presentation at winnipegs Pecha Kucha the other night- was incredibly nerve racking to show my work to a full theatre of people, but a great experience non-the-less. I'll be able to post my video as soon as it's posted :)

I always find around this time of year, when summer is starting up and the weather really heats up, that I get more lazy and generally uninspired for a time. I always chalked it up to your body trying to adjust to the new weather pattern. Upon some research, I found that many of my friends also go through a blah-spell around this time. weird, and annoying.

I am a confirmed artist for Chicago Wizard Con! which is a 4day con in august (2nd biggest con in north america, second only to San Diego), so I have a bit of time to prep some new artwork... I am all kinds of excited.
Posted by Justin at 7:21 AM No comments:

some new stuff to tide you over 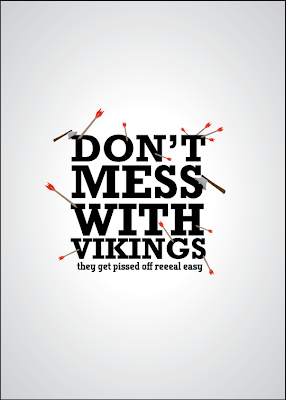 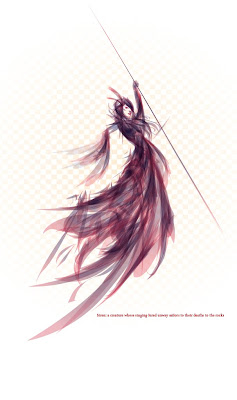 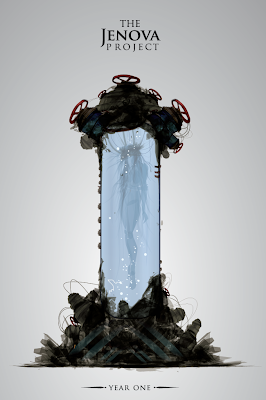 THE BREAKDOWN:
THURSDAY: attended some friends (Charles and Crystal) going away party at triple Bs- they are moving back to the country for the summer... Me and my co-hort Barney ended up convincing them that a spur-of-the-moment Calgary trip would be all kinds of awesome. They agreed and promplety ran home to pack for the trip. 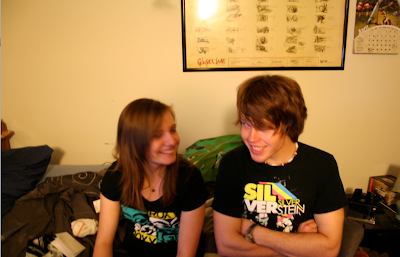 (Charles and crystal, not too sure what they just got themselves into) 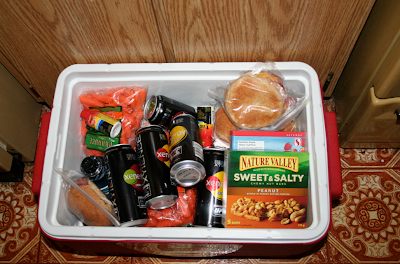 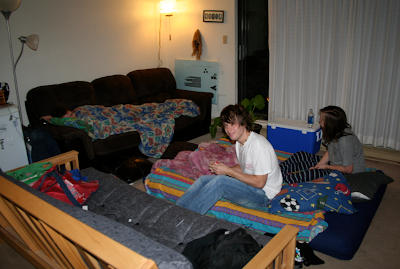 The adventure starts! 5Am (ouch) we started the day with a 5hour energy shot... they friggen hurt when drank the second you wake up (and on an empty stomach)

managed to make it into calgary in just over 13h, fantastic time. 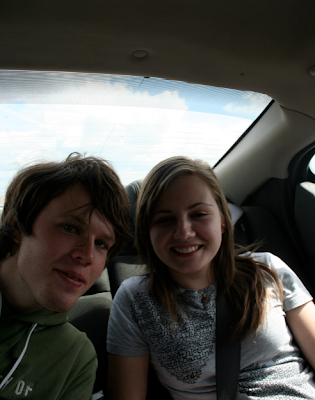 ps- alberta just loves their nikelback... we could not escape nikelback songs on the radio

After only a couple bewildering detours downtown calgary- we stopped off at the BMO roundup centre (where the con will be held) to register/pick up badges and do a bit of setup for the next day.

It was already easy to tell that this would be a absolute Sh!t storm when tomorrow rolled around, the sheer amount of booths, merch, and displays was staggering. It was a scary thought to see this setup+a couple thousand people. 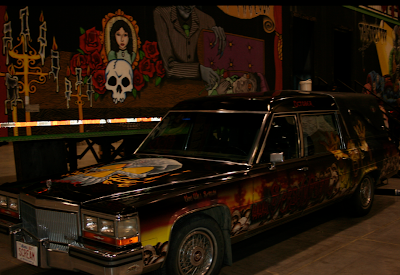 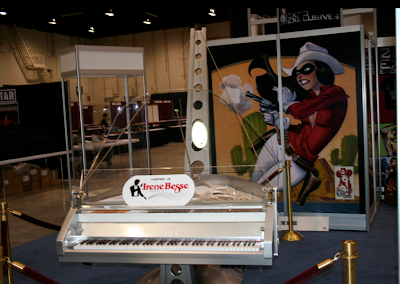 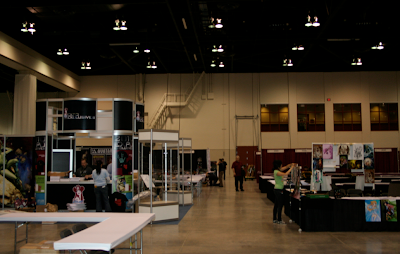 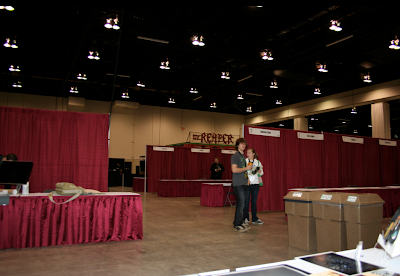 Having all my stuff ready to transform and roll out for Sat/Sun, we headed to “brewsters” for a much needed pint and some food. And good lord did this place have Pints! “Brewsters” micro brews a whole whack of their own beer flavours, they all tasted fantastic, we made a point of heading here for supper the next 2 nights as well.

SATURDAY: time for a con! 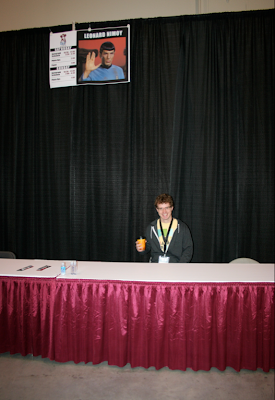 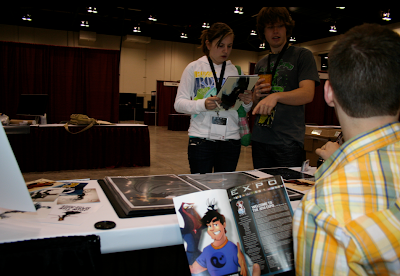 the con tables were very narrow... it was defiantly a bit of a cramped artists alley- good thing I had awesome neighbours. 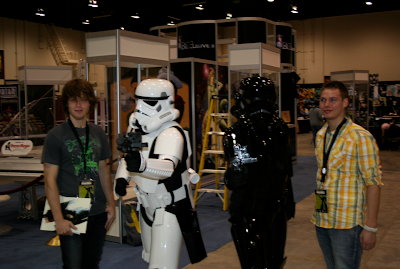 (Charles and I hanging out with some storm troopers)

9:00 rolls around, and a wave of geeks, nerds, trekkies and everything in between poured into the centre

I hear they topped over 20,000 attendance on Saturday alone! My day was a bit of a blur, I could only really leave my table for quick bathroom breaks, other than that, it was a constant stream of people asking questions about my artwork, processes, etc and buying prints. It was overwhelming in a really great way.

I managed to snag myself a spot in the 2010 Calgry Expo artbook. It was a HUGE honour to share page spreads with the truly amazing talents that fill the book.

First thing saturday morning I sent Charles and Crystal around with my book to get all the artists to sign their pages in it, think they only missed a couple The Chief likes my artwork!! haha I got the chance to chat it up with both Helo and the Chief from Battlestar Gallactica,(made a funny little comic about them) both super chill guys, wish I made up some better fanart to give em. next time!

con is done for the day = BACK TO BREWSTERS FOR PINTS 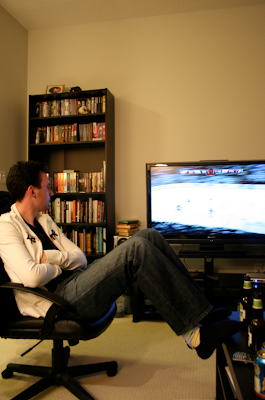 Hanging out at our friend Bailey's place, sipping back some "Dude" beer. tasty stuff :) 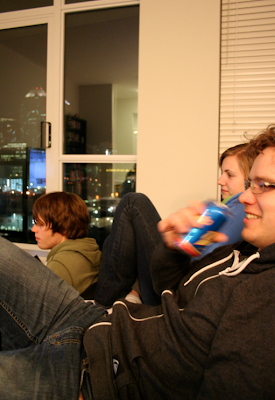 got to sleep in a bit (woot) On our way in, we saw the cons lineup (we get to use a “celebrity entrance” lol) this flipping line was wrapping its way completely around the huge Roundup Centre, it was just massive. Then, once you get into the convention, if you wanted to meet spock, it was around a 3hour wait in line. Eep.

Enjoy some other pics of the wknd :)

ps(i didn't take the pics below, just wanted to give you an idea of the cool stuff there!) 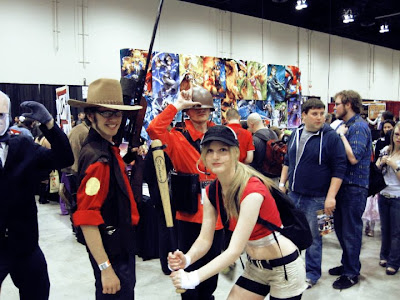 And of course when sunday rolled to a close: BACK TO BREWSTERS FOR PINTS
Things for next time:

I have plans to make a limited run poster of the “queen vs predator” in the shattered style specificity for cons. I am so excited to start into it, especially after the phenomenal amount of praise and support for the shattered vector style

This is an annual trip for me now, fantastic times!!
Cheers mates!

Posted by Justin at 7:38 AM No comments: